My best bud lived right down the road from me when I was in elementary school. We caught the same bus to school. We played in the same woods. We went crawfishing in the same muddy ponds. We played baseball together. We both had patches on the knees of our pants and we both were constantly trying to out do each other. I went to church and he didn’t. I knew the words to “This Little Light of Mine” and “Amazing Grace.” He knew the words to “Maybelline” a popular hot rod song and another classic called “The One Eyed, One Horned, Flying Purple People Eater.” But what really caused me to be consumed with a green with envy, desire to know the words to another song he rapped out. (And this was wayyyyy before any kind of rap, mind you.) It was him singing the words to John Fogerty’s “Haunted House”.

I just moved in my new house today
Moving was hot but I got squared away
When bells started ringing and chains rattled loud
I knew I’d moved in a haunted house!

From out of space there sat a man
On the hot stove with the pots and pans
Say that’s hot, I began to shout
He drank a hot coffee right from the spout

He ate the raw meat right from my hand
Drank the hot grease from the frying pan
He said to me, well you better run
And don’t be here when the morning comes

Years have passed and so has my friend. Those songs have lost their appeal to the public. New songs are gripping the hearts of peoples minds and souls, but the songs I learned are still going strong. My friend, DON’T BE DECEIVED by what the world is offering. It will only last for a season. The things of God are what you want to invest in. Only they are going to last eternal. 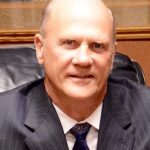